i Feb 17th w No Comments x by Gerry Luginbuhl

The Wildlife Diversity staff with the North Carolina Wildlife Resources Commission have submitted a proposal to the Beaufort County Board of Commissioners to manage 1,645 acres of the 2,800 acre former Voice of America (VOA) site. This former transmission facility is the largest expanse of contiguous grassland in North Carolina. The transfer of these acres to the NC Wildlife Resources Commission will, for the first time, allow the public access to the only robust population of breeding Henslow’s Sparrows in the eastern Unite States. The VOA closed in 2006 and is now disposing of the land. Beaufort County has been given first option to develop a parks and recreation plan for the entire site, and the Wildlife Commission’s proposal will complement active recreation facilities which may occur on the remaining acreage.

To read more about the proposed development of the former Voice of America site and to learn what you can do the protect this valuable resource, please visit our Advocacy page.

i Feb 16th w No Comments x by Gerry Luginbuhl

Authored by Bob Oberfelder
All photos also by Bob

The 2014 Wings Over Water Festival (WOW) took place during the last week of October, and my wife and I stuffed a host of activities into about a day and a half. We were impressed with nearly every aspect of the festival, the quality of the trip leaders, the quality of the birding, the art instruction and last (but definitely not least) the quality of the keynote speaker. While most of the participants we met were regional, North Carolina or Virginia residents, there was at least one couple on our walks that came from El Paso, Texas. They made a special trip to attend the festival for the eastern birding experience. Our busy schedule and obligations allowed only a limited amount of time so we drove down to the North Carolina coast on Friday afternoon, spent a full day participating in WOW activities on Saturday, then returned home on Sunday.

Saturday was indeed a very full day. We spent the morning at the Old Oregon Inlet Coast Guard Station, a trip lead by Ricky Davis. We met the group at the south end of Bonner Bridge. This area is a migrant trap and thus a birding hotspot which often gets more than it’s share of unusual birds. We saw, and in some cases photographed, a number of interesting birds. We saw Brown Pelicans, Semi-palmated Plovers, Dunlin, Least Sandpipers, Greater Yellow-legs, numerous Palm Warblers, a Blackpoll Warbler, a White-winged Dove, many Kinglets, and of course the requisite trove of Yellow-rumped Warblers. While we were there, Jeff Lewis and others heard a Bell’s Vireo, a very rare bird. Despite an hours long effort, no one actually saw this bird. In the brushy area near the Old Coast Guard Station, Ricky Davis spotted a Wandering Glider (a dragonfly) perched on some reeds. Ricky described this dragonfly as one that is almost always in motion and rarely perches. He indicated had seen one perched only a few times. At the end of the trip, we explored the catwalk on both sides of the southern end of the Bonner Bridge and discovered a very cooperative Ruddy Turnstone that allowed me to get so close I could not focus my camera. (I was probably less than 5 feet from this bird. Note the jailbird photo.) 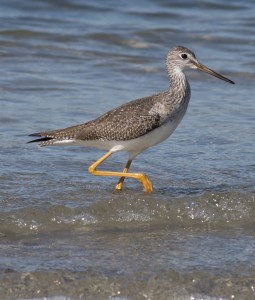 Saturday afternoon I attended the Shorebirds and Waders trip lead by Steve Shultz, while my wife attended the wildlife sketching session lead by North Carolina artist John Sill. I met Steve and the group at the Bodie Island Lighthouse parking lot and hitched a ride with a fellow birder from Rocky Mount N.C. We spent most of the afternoon at the North Pond in the Pea Island National Wildlife Refuge. Steve did an excellent job leading the shorebird trip, and my wife enjoyed the wildlife drawing session as well. For me, the highlights of the trip were a Peregrine Falcon causing pandemonium at the North Pond, close views of some Marbled Godwits, a group of White Ibis, and about 75 White Pelicans. I thought there were good numbers of ducks and shorebirds present at Pea Island, however Steve said that Friday they were even more plentiful. We ended the day at the keynote dinner, this year held at the National Wildlife Refuge Visitor Center on Roanoke Island. The Keynote speaker was Noah Strycker who is both an excellent birder and a very entertaining speaker. Noah is a young man, about 25 years old who has followed his passion for birding into a career. Noah described his fascination with bird behavior, the driving force to write his new book “The Thing With Feathers,” a very interesting read. As a teenager Noah was interested in the behavior of Turkey Vultures, whether they were able to find their meals by sight or exclusively by smell. In order to determine which, Noah decided to sequester a deer carcass, and brought it back to his home in the trunk of his car late one evening and parked the car in the family garage. He then forgot about the carcass that was stored for a couple of days in the trunk of his car inside his garage. He knew the answer to his question when he awoke to a group of 15-20 Vultures sitting perched in trees around his garage. With the help of various sponsors, Noah is planning a 2015 worldwide Big Year with a goal of amassing 5000 birds. Considering the places he has been and the birding he has already done, I would not be surprised to see him achieve his goal.

A quick trip to Alligator River National Wildlife Refuge on the way home Sunday resulted in two Black Bear sightings. On Friday evening nearly at dusk, we had stopped in for a brief visit and observed a distant black bear in one of the fields. Since both of these visits to the refuge were very brief, and at different times of day, clearly the reputation of Alligator River National Wildlife Refuge as a haven for black bears is well deserved. On Sunday we had excellent views of both an American Restart, and a Sedge Wren. We both agreed that the WOW weekend was successful. The trip leaders and the WOW organizers should be congratulated for a first rate festival and I would encourage people of the birding community to check it out next year. Here is their website

i Feb 3rd w No Comments x by Gerry Luginbuhl

Join citizen scientists and bird nerds across North Carolina when they direct their eyes to the sky for Audubon’s Great Backyard Bird Count (GBBC) over Valentine’s Weekend. Now in its 18th year, the four-day event is encouraging bird watchers of all ages and skill level to contribute to research and conservation on a global level.

The GBBC is for everyone, everywhere! Becoming a citizen-scientist is easy when you count birds for at least 15 minutes on one or more days of the count, and submit your sightings to www.BirdCount.org. And the information gathered by volunteers helps track the health of bird populations at a scale that would not otherwise be possible!

The Great Backyard Bird Count is the perfect follow-up to the Christmas Bird Count allowing us to track birds movements throughout the winter months. The data collected by thousands of citizen scientists across North Carolina is increasingly important to Audubon’s work as we develop new conservation methods to protect our birds from the effects of climate change.

North Carolina continues to be a top-performing state for the GBBC. During last year’s citizen science event, more than 5,000 checklists were submitted in our state. The largest single species count was 12,000 Redheads at Ocracoke Island, and the most frequently reported species were the Northern Cardinal and Dark-eyed Junco. In total, 204 individual species were spotted during the four-day event. For those bird nerds in need of a fun activity to share with their kids, the GBBC has plenty to choose from! With its less structured design, this weekend event is a great opportunity to introduce children of all ages to the excitement of bird watching. Audubon has created games and activities to help parents engage their kids in the count, and foster a love of citizen science from an early age.

With 96 classified Important Bird Areas comprising 4.9 million acres, diverse landscapes from the mountains to the coast, and the state’s position along the Atlantic Flyway migration path, North Carolina is for the birds. And with so many species to spot, our citizen scientists have made NC one of the top performing states in the Count each year.

The GBBC continues to grow thanks to integration with the eBird online checklist program. Bird watchers from 135 countries participated in the 2014 count, documenting nearly 4,300 species on more than 144,000 bird checklists. Many fell in love with the magnificent Snowy Owl during the last count when the birds were reported in unprecedented numbers across southeastern Canada, the Great Lakes states, the Northeast and down the Atlantic Coast. Expect Snowy Owls to show up in higher numbers during this year’s GBBC, too.

The GBBC is a joint project of the Cornell Lab of Ornithology and the National Audubon Society with partner Bird Studies Canada. To learn more about Audubon’s Great Backyard Bird Count visit birdsource.org/gbbc.

North Carolina is for the Birds During the Great Backyard Bird Count is
re-posted with permission from Audubon North Carolina. Originally posted on January 27, 2015 by maholley