The Swifts Did Swirl In: Celebrate Swifts August 21 – 23

The Swifts Did Swirl In: Celebrate Swifts August 21 – 23

i Jul 31st w No Comments x by Gerry Luginbuhl

Friday, May 22, after a morning of banding birds, Eddie Owens and I were getting ready to hop in our cars when he pointed to a small group of swifts circling above the Chimney Swift Roost Tower at Prairie Ridge Ecostation in west Raleigh.

As we watched, one of the birds took a quick turn and disappeared down the mouth of the chimney. We were thrilled to confirm reports from others that swifts had discovered our tower. But this wasn’t the first bit of good news Wake Audubon had received about swifts this spring.

Earlier in May, I watched four chimney swifts circle over an information kiosk at Anderson Point Park in east Raleigh. The swifts were noisy and clearly eyeing the structure. Of course this wasn’t just any old information kiosk; it was one Wake Audubon had commissioned several years ago to be built by an Eagle Scout, and it had a swift nesting chimney installed as its center.

Soon the birds circled higher, and I was able to watch a swift fly through the top of a tall maple to grab dead twigs. They returned to the kiosk. One of the swirling swifts raised its wings high, slowed down, and descended into the chimney’s center. It was the first confirmation that swifts are using the kiosk for nesting!

All of this began with Wake Audubon’s ambitious undertaking to install the Chimney Swift Roost Tower at Prairie Ridge Ecostation, a field research and education center for the NC Museum of Natural Sciences.

We spent three years planning and raising funds for the $36,000 project. More than 150 of you bought inscribed bricks. We secured donations from the Carolina Bird Club and the estate of Vicki Weiss, as well as grants from the Toyota TogetherGreen by Audubon program. Frank Harmon Associates donated design services and Custom Brick & Supply of Raleigh donated the bricks. Installation of the tower was completed in November.

The tower is one of just a few large brick chimneys that have been built specifically for roosting swifts in the eastern U.S. We think it is, in fact, one of only three. Our tower is large: 30 feet tall with a 5-foot by 5-foot opening, designed to accommodate thousands of roosting swifts. There are portholes for looking inside the tower and for installing cameras and scientific equipment. We are hopeful, but there are no guarantees with these things.

Of course we did our homework, which meant contacting Paul and Georgeann Kyle in Austin, Texas, who established a chimney swift research center in Austin and spearheaded the chimneyswifts.org website. They have years of experience experimenting with the design of swift nesting structures, including the practical swift nesting information kiosk that proved successful at Anderson Point Park. And they have had some success with small roosts.

With the tower completed, our attention turns to celebrating it with you, together with experts from across North America who have tirelessly worked to conserve this species of concern. In March, Wake Audubon received a Toyota TogetherGreen Alumni Award to host a chimney swift conservation forum and workshop.

When we began thinking about hosting a forum, our first invitation was sent to the Kyles, who agreed to be our featured speakers and will give an overview of their decades spent working with swifts. But there will be more, much more.

Researchers from UNC Chapel Hill will offer a three-dimensional look at the flight patterns of swift flocks filmed flying above downtown Raleigh; Amy Weidensaul and Brian Shema from Audubon Pennsylvania will discuss educational programming at swift roosts; Charles Collins, a retired biologist from California, will compare swifts from around the world, and Larry Schwitter will describe Vaux’s Happenings in Washington state. Audubon NC plans to highlight chimney swifts across the state next year.

Join us Friday evening, August 21, at the NC Museum of Natural Sciences for the symposium. On Saturday, August 22, Wake Audubon will partner with the museum to host the Chimney Swift Family Festival at Prairie Ridge Ecostation — our official celebration of the completion of the Chimney Swift Roost Tower. This will be a family-friendly event starting mid-afternoon. The festivities will include games for all ages, such as a roost-hole corn-hole contest, swift nest and mask making, and catch-a penny stealer bug chase games. (Intrigued? We know you are!) We will also have educational tables, arts and crafts, food trucks, music, guided hikes, and a roost viewing as the sun sets. Sunday at dusk, join us for swift roost viewings at other county sites.

Details on these events will be posted here, on our Celebrate Swifts page. All are free admission.

We can use volunteer help at Family Festival. Please contact us at volunteer@wakeaudubon.org if you are able to help. And please plan to attend the Friday chimney swift forum the Saturday family festival and the Sunday swift viewing the weekend of August 21-23.

i Jul 18th w No Comments x by Gerry Luginbuhl

We focus on the Chimney Swift because this species lives across the eastern half of North America. We are working to protect this species, which is threatened by loss of nesting and roosting habitat.  But there are three other species of swifts in North America. What about them? Our symposium on August 21st will provide more information on all the American swifts. Here is some background information.

In western America there are no Chimney Swifts (maybe a few wanderers), however, there are three other swift species: Vaux’s, White-throated, and Black Swifts. Vaux’s Swifts, Chaetura vauxi , breed in the Pacific Northwest – British Columbia, Washington and Oregon. They nest in hollows of large trees, a resource that is disappearing as old growth forests continue to be logged. They have also started nesting in chimneys. This is the same story as we have with the Chimney Swifts.  The Vaux’s Swifts migrate to their wintering habitat in Central America and Venezuela. During their migration, large flocks of up to 20,000 birds can be seen entering large chimneys along the route. A popular viewing site is in Portland, Oregon. Visit the Audubon Portland website to learn more and see  more pictures of the Vaux’s Swift. White-throated Swift’s, Aeronautes saxatalis, breed in the Rocky Mountains and high plains of America. Unlike the Chimney and Vaux’s Swifts, the White-throated Swifts build their nests on the sides of cliffs and roost in large groups in the fissures of cliff faces during migration. Their wintering grounds are in the Southwestern US, Mexico and Central America. The Black Swift, Cypseloides niger, is the largest swift, but its population is the smallest. They can be found nesting on cliffs from the American plains to the Pacific Ocean. They even nest on the rock cliffs behind waterfalls. They are mostly found in British Columbia, but local populations exist throughout the western US.  Recent information puts their wintering grounds in Brazil.  Although we focus mainly on the Chimney Swift, you can learn more about all of the swift species at Wake Audubon’s Swift Symposium. Please join us on Friday, August 21st from 6-9 pm at the NC Museum of Natural Sciences. i Jul 13th w No Comments x by Gerry Luginbuhl

It has been a few weeks since our last update (from Wilkerson) and the weather has turned HOT, but the established milkweeds in our East Pasture don’t seem to mind, going on growing and blooming despite it all.  “Your” newly planted milkweeds in the West Pasture have depended on regular watering from staff and devoted volunteers to stay perky.

The caterpillars seen a few weeks ago have all disappeared now.  I’ve noticed that monarch caterpillars would sometimes “disappear” from a plant during the day, only to reappear again on the same plant later, so I know the “disappearance” of a caterpillar doesn’t prove it has died – it may just have moved downstem somewhere (maybe caterpillars need a break from the heat too?).  But recently the disappearances seem to have become permanent – this may mean the caterpillars have entered chrysalises hidden under leaves or attached somewhere else in the dense grass.  If I manage to find one, I’ll send a picture in a later update.

Meanwhile, the pause in monarch caterpillars is a chance to look at some of the other creatures who also use, or even depend on milkweed, besides the monarchs. First, another butterfly.  This Silver-spotted Skipper doesn’t lay eggs on milkweed, but it does pollinate the flowers.  This butterfly is said to avoid yellow flowers, but these pink milkweed blossoms seemed to suit it just fine.  Milkweed nectar serves many more species than just milkweed specialists. Next, a beetle, or rather, two beetles (viewer discretion advised).  Called Red Milkweed Beetles, this species is a milkweed specialist, like the monarch.  The bright red color of the adult beetles (like the orange of an adult monarch) is a warning that they are packed with milkweed toxins, and predators should think twice before eating too many of these seemingly easy targets. Finally, a bug.  This tiny black-and-white nymph is the young form a true bug known as a leafhopper.  Most leafhopper nymphs are camouflaged in green or brown, but this nymph really stands out.  Could the black-and-white tuxedo pattern also be a warning, similar to the black-and-white stripes of a monarch caterpillar? Little is known about this insect, which only has a scientific name: Scaphoideus incises.  Reports suggest it is particularly found on milkweed and has a wide distribution in North America, but is not seen often.  This specimen, found on one of “your” milkweeds planted at Wilkerson, was the first report of this species in Wake County (special thanks to Brian Bockhahn of NC State Parks for confirming the ID!).
So while we wait for the next generation of monarchs to appear, I hope you all enjoyed meeting some of our other milkweed insects.

More on Monarchs and Milkweed

i Jul 3rd w No Comments x by Gerry Luginbuhl

It is June 3rd, and our wonderful milkweed has been in the ground for just over 2 weeks now (at Harris Lake) and I am happy to report it is doing great! So far, we have had 3 plants nibbled and 2 plants appear to be gone (we have been watering the spots in hopes that there may still be roots present). Out of 96 plants, I’d say that is excellent. All of the plants are showing new growth and appear to be very healthy.

Since this is the first milkweed we have had in our field, John thinks it will be August or so before we start noticing any monarch activity. We can’t wait until the monarchs “discover” us!

I would like to thank you all again for your help and expertise with the planting process. I had a great time, and I hope you all did too! A huge thank you to John Connors for his guidance, experience, passion and organization of this project. We are thrilled to provide Milkweed for Monarchs!

Thanks again and we welcome you to visit “your” milkweed anytime! When it does not rain, we will be watering for several more weeks and I think we’ve got a great system in place. Just let me know if you are interested in coming out. 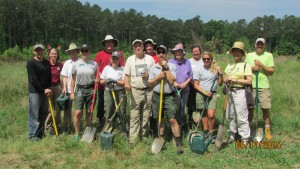 Milkweed planting crew from Wake Audubon. Planting at Harris Lake was on May 17, 2015