“Angle-wings” refers to a group of well-named butterflies with very angular edges to their wings. 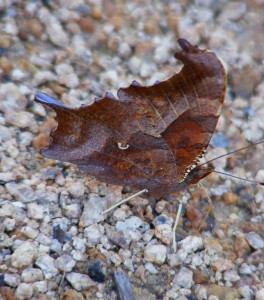 I recently learned that there is reference to “Angel Wings” on the Internet, referring to butterflies, apparently these same ones. A typo no doubt.  But this reminds me that there are tropical butterflies with clear wings, often called, sure enough “Clearwing butterflies”.  I just photographed one species in Nicaragua, which I will include for reference.  To me, a butterfly with clear wings seems more like an angel. But, back to our geometrically-enhanced leps………….

The two common species of angle-wings around our area are the Comma, and Question Mark.  They’re quite similar to each other. Not in a punctuation-syntax way, but rather, morphologically. These are black and orange butterflies, with cryptic, darkly colored patterns underneath that blend in well with the bark of a tree (but not our orange house, as seen below).  It is the underside that best determines the correct syntax, er, species – a shiny crescent on a dark background with or without the diacritical point.  These species exhibit some variation in the amount of black on the upperside of the wings.  They are pugnacious little devils as well, “attacking” all manner of fauna that may walk or fly by too close (and they determine what is “too close”).  Comma and Question Mark larvae feed on nettles and elms; and the Question Mark will also feed on Hackberry.  Both butterfly species are regular in our area, but I see more Question Marks (perhaps a reflection of my general outlook on life).  Indeed, the April 2014 picture included below is my first Comma for the yard.  Adults of both species hibernate over the winter, and you can often find one out and about on a warmer/sunny winter day. Hmmmm, I wonder if anyone saw any angle-wings this past winter.  Notable, adults of these two species seldom visit flowers: they prefer to feed at rotting fruit, tree sap, and/or animal droppings (they would make fine….. well, never mind). Here are images of these butterflies.  Also included is a Question Mark caterpillar from the Uwharries – and, as mentioned, a clearwing species from Nicaragua. As far as I know, no one has described a “Semi-colon” or “Exclamation Point” butterfly – yet. All photos by John Gerwin