i May 9th w No Comments x by Gerry Luginbuhl

“Can you tell me what kind of bird nest this is?” Brian and I get that question a fair amount as part of our jobs as bird researchers and educators at the NC Museum of Natural Sciences. The question usually comes with a photo. Recently, I received an email and photo of a nest in one of those typical “corner of the carport roof areas”. The homeowners could not get a look at the birds. But the nest was made with a lot of sticks, along with some colorful pieces of plastic. In our urban areas, birds have adapted well, or taken a real liking to, plastic of any sort, but the colored pieces stand out and always make me smile.

About a week ago, a neighbor flagged me down, and had the same question.

There are really four “usual suspects” that build a nest on our houses (the more rude ones just barge right in). These are: Carolina Wren, House Finch, American Robin, and Eastern Phoebe. On occasion, I hear of Mourning Doves building their clumsy stick nests on a window ledge (often with poor results).

In those housing developments, somewhere between urban and rural, we find yet another porch possibility – the Barn Swallow, which makes a nest mostly of mud. No sooner had I typed this, when I received an email from a homeowner in a new subdivision in Wake Forest, asking for advice on “controlling” a pair of Barn Swallows nesting on the small ledge overhanging their front door (advice: they need their own “mud room”).

The photo that started this note, of the nest of sticks and plastic, looked like a House Finch to me and when the homeowner was finally able to get some photos of the birds, my assessment proved to be correct (see photo).

Wren nests are bulky things of mostly dead leaves (pine or hard wood) lined with dead grasses. One image of a wren nest is included. There are variations! Robin nests are mud, wrapped in dried grasses.

Recently, a co-worker brought a nest to my office that was nothing but pink threads! An entrepreneurial bird had found a young girls’ sweater on a clothesline somewhere and figured a way to unravel quite a bit of it and make a nest. It had the size and shape of a chickadee nest. And chickadees are very fond of something soft and fuzzy – their nests are made mostly of moss. I had to attach an image. I know a few other birds that use moss. One, the Northern Parula (warbler) will build its nest inside Spanish moss – wait, that’s a trick statement. Spanish moss is not a moss but a flowering plant in these parts (a bromeliad, actually). Parulas to the west of where Spanish moss occurs (e.g. in the Uwharries) will weave a moss look-alike – Long-beard Lichen – into the outer walls of the nest. This warbler is a forest bird and where water is present, it will often be found alongside it (and a couple folks reported some migrants this spring and I’ve had one in the garden out back in the fall).

Another urban bird that uses true moss, like the chickadee, is the Eastern Phoebe. This is a member of the flycatcher family, which is a mostly tropical group of birds. The name derives from its call, which to many sounds like “fee bee”, and to others, (like me), “Free beer”. Of course, accents vary across the range of any singing/calling bird. The Phoebe call is rather “gruff” or raspy sounding, whereas the Chickadee, which also makes a “fee bee” song in the spring, does so in a pure, clear tone.

And now let’s help my neighbor. I did not even have to look on her porch (but I did anyway of course). I had been scoping out her porch for the past few days as I mowed her lawn, because I had seen a Phoebe go back and forth from the bridge over our stream on Ravenwood, to her house. In the really old days, phoebes nested on rock ledges. In due time, they adopted bridges and these days pretty much any bridge over water, troubled or not, will host a phoebe nest. And today, many a kiosk and front porch are also host to a pair of nesting phoebes. To be honest, I had assumed the bird was nesting under the bridge but I was perplexed by its constant returns to the bannister of her porch.

But there it was, in the porch corner (see photos). On April 29, the nest seemed nearly complete. On May 1, it was still empty and if it were complete, that’d be no surprise. Often a female bird will finish building a nest, and then spend several days fattening up in order to have all the nutrition she’ll need to lay 3-5 eggs– imagine! (Fattening up that is, on purpose).

The Phoebe is both dull and adorable, which I guess, makes it Adullable. I really can’t stress enough how “quiet” the plumage is. I have attached some pictures for you to see for yourself (both an adult, and a young one just a few weeks old, and some nestlings about to take their first flight). It is similar in shape/size/appearance to another (dull) flycatcher called the Eastern Wood Pewee (which also gets its name from its call). I have also attached two pics of that species. The Pewee is a forest bird, either pine, hardwood, or mixed, but you need a good-sized patch to find one during the breeding season (like Umstead Park).

The Phoebe is a short-distance migrant, if one migrates at all. If the water in its feeding area does not freeze, many of them will hang around all winter. During hard freezes, they seem to have the ability to move to open water areas, and survive. We do not understand how this occurs (Robins do the same thing). What is interesting is that many flycatchers, including phoebes, become frugivorous (fruit-eating) in the fall and winter. But because they still seem to like to have some open water around, they must be eating some bugs as well. Each fall we find one helping itself to some of the Beautyberries in our front yard over here.

An interesting tidbit is that the phoebe was the first “banded” bird. John James Audubon tied some silvered thread to several birds on his property in Pennsylvania in 1804 and the next year, one returned.

Pewees are a long-distance migrant. They head to South America for the most part. And they remain insectivorous.

If you are interested in hosting a “ledge”-nesting bird, you can try building a nest shelf, with the plans I have included. There are numerous websites devoted to attracting and identifying birds these days, but one very useful one is www.allaboutbirds.org .

Finally, one other urban, and house-inhabiting flycatcher is the Great Crested Flycatcher. This is one of the “rude” ones. If you have an exhaust pipe for say, your dryer, and you don’t use the dryer much in late April/May when these birds return, one might build a nest in it. But this and other species that may nest within our homes, are fodder for another article. 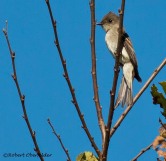 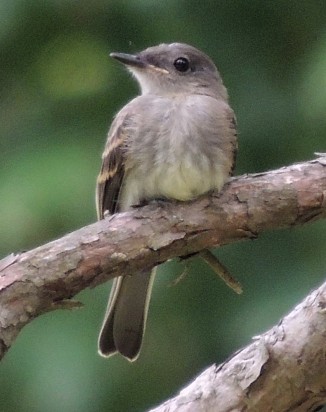 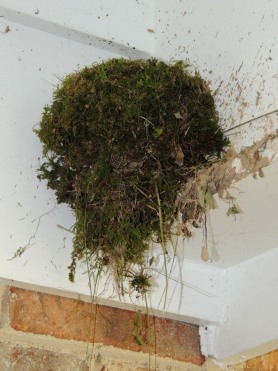 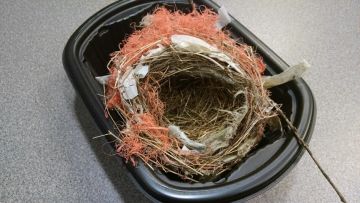 NestShelf_EAPH-BARS-AMRO – click on the highlighted text for directions on making a nest shelf.